How to Perform Shopify SEO Audit 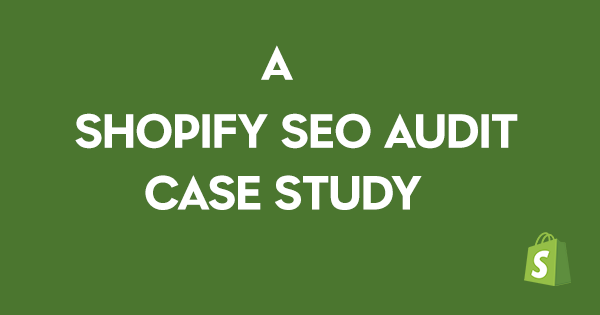 Shopify is one of the most popular e-commerce platforms and they are growing fast. Last year, I was contacted to do an SEO audit on a Shopify site because they were experiencing a huge traffic drop being moved from a custom PHP based e-commerce platform to Shopify.

I was given access to the company’s Shopify CMS, Google Search Console, Google Analytics, and AdWords account to do the audit. I also asked when was the site migrated and if they followed any specific guidelines like this one from Google.

They followed none of these steps and migrated the site straight to Shopify without considering the consequences.

I found several technical reasons causing the site drastically losing its ranking and traffic. This post is to discuss details about those reasons. Also, If you are looking for Shopify SEO tips this is an ideal post.

1. Store-Owned Domain & Shopify-Managed Domain Both were Allowed to be Indexed and Causing Duplicate Content Issues

Web pages from their own domain and Shopify-managed domain were being indexed. It is not helpful for the search engines when they found duplicate contents, and the website itself was damaging its crawl budget by allowing this

Last year I tweeted about it as well

If you are on @Shopify or @squarespace be extra careful about BUILT-IN DOMAIN and don’t ruin your #SEO pic.twitter.com/LZNqumlxok

2. Both URLs With and Without Trailing Slash were Returning 200 Response Code

From a technical search engine standpoint, these two URL versions can contain different contents. So, search engines (Google, Bing etc .) are considering the pages as separate ones and that must be fixed to avoid the duplicate content issue.

3. Both WWW and Non-WWW Versions were Indexed by Google

Google has specific guidelines on verifying WWW, non-WWW, HTTPS and non-HTTPS versions of the site and specifying the preferred domain. I told my client to verify WWW, non-WWW, HTTP, HTTPS all four versions of the site with Google Search Console. I also recommended them to verify the site with Bing Webmaster Tools because Bing is another popular search engine.

4. IP Address of the Previous Site was Indexed by Google

During auditing Google Search Console account, I found an IP address which was indexed by Google. It turned out to be the IP address of the previous site 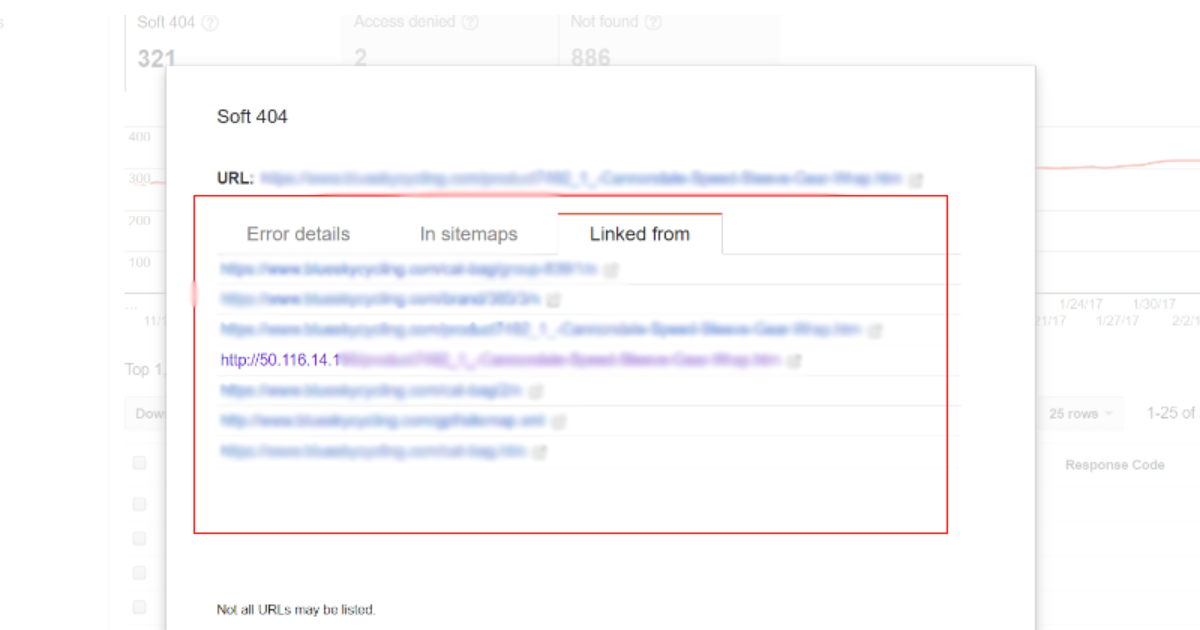 The previous site was not blocked for the search engines and a large number of pages got indexed by Google. It was also using the same Google Analytics tracking code as the live site which was diluting their traffic data. That’s why I told them to restrict the old site access by IP address, block or password-protect it, immediately.

I also found that there are rooms to optimize the sitemap file by submitting a separate sitemap for the images.

While auditing their Google Analytics account, I found that internal search term number dropped a lot since the site moved to Shopify.

Which search terms the potential buyers entered, and how effectively the search results created deeper engagement with their site, these are vital information for an e-commerce business. So, it was clear that this issue must be fixed

After the audit, I recommended the client to add structured data markup, investigate more on canonical tags, and revamp the testimonial page to collect more reviews. They were using AdWords but not the remarketing tracking code, So, I told them to add it.

They had a large number of duplicate meta description which actually is not a critical issue for a large e-commerce store but I still told them to keep an eye on it.

I suggested them to analyze their traffic data carefully and allow search engines to index those internal search result pages which are bringing traffic and revenue. Here is a helpful article which discussed this topic

My client also forgot to update their funnel URLs in Google Analytics when their site was moved to Shopify so I told them to update it as soon as possible because this is vital to measure conversion number. As AdWords & Analytics accounts were linked I also suggested them to investigate the AdWords conversion number carefully. 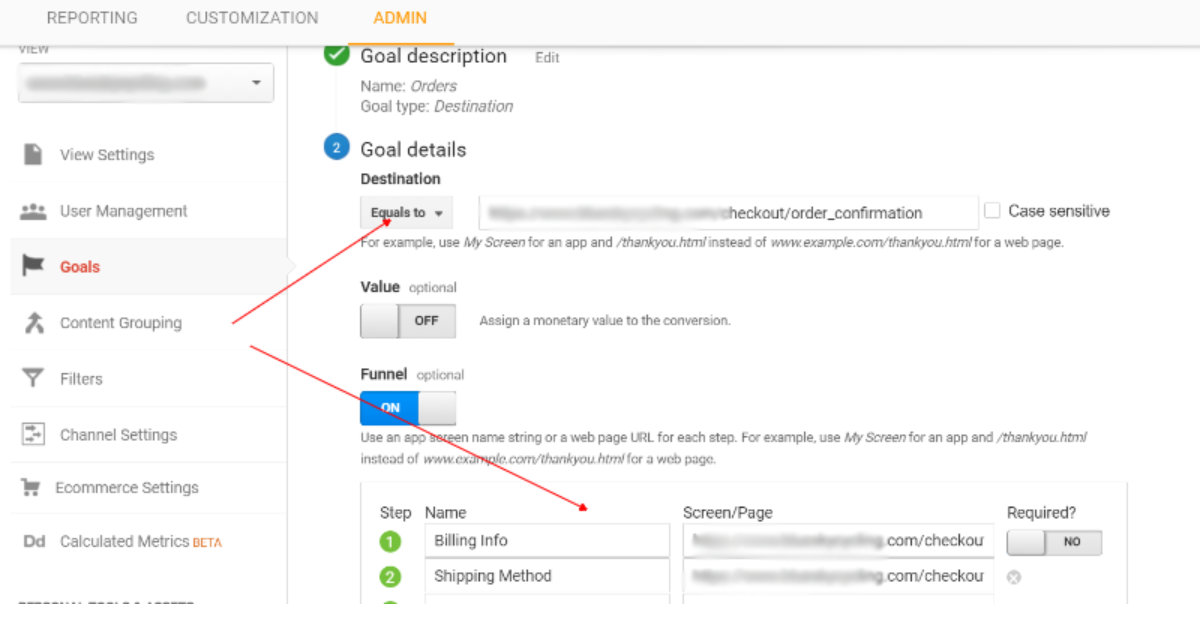 9. Pages with HTTP 404 Error were Hurting Traffic and PPC Budget 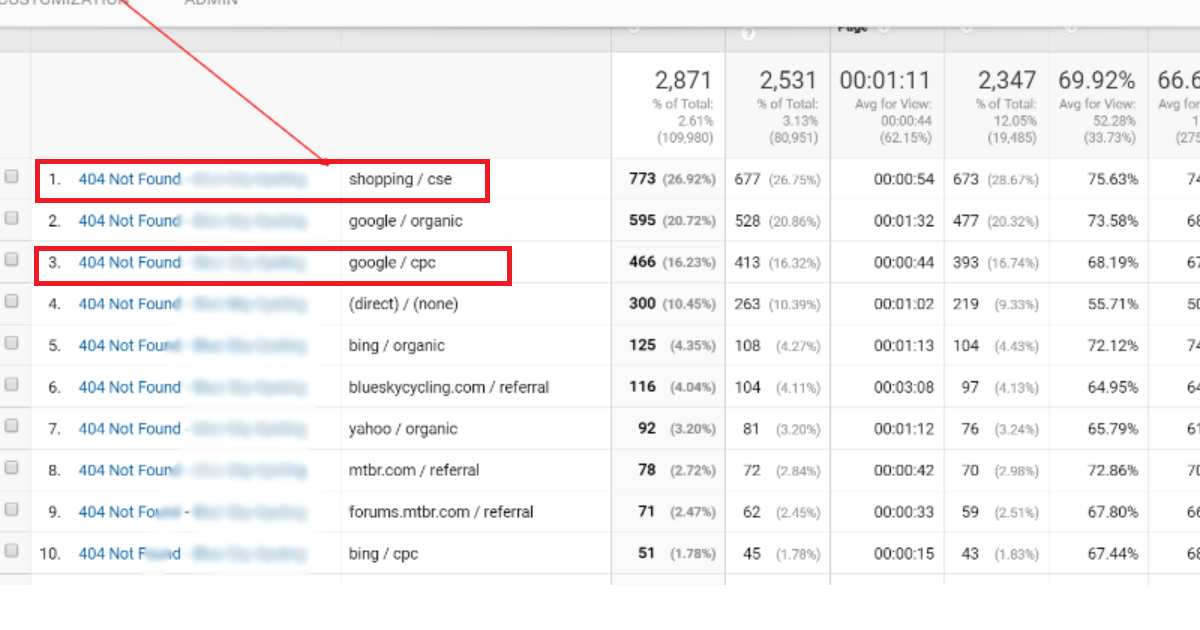 It was clear from the image that lots of pages were throwing 404. I recommended the client to stop the AdWords shopping, text and Bing campaigns immediately to not waste any more money, and get those 404 errors fixed.

I also told them to find out those 404 pages which were important for link building and which were being used by the affiliates. Those 404 errors being fixed, my recommendation for them was to set up an alert using Google Analytics to easily monitor. I also advised them to redesign the 404 page to inform the visitors that the site has been moved. 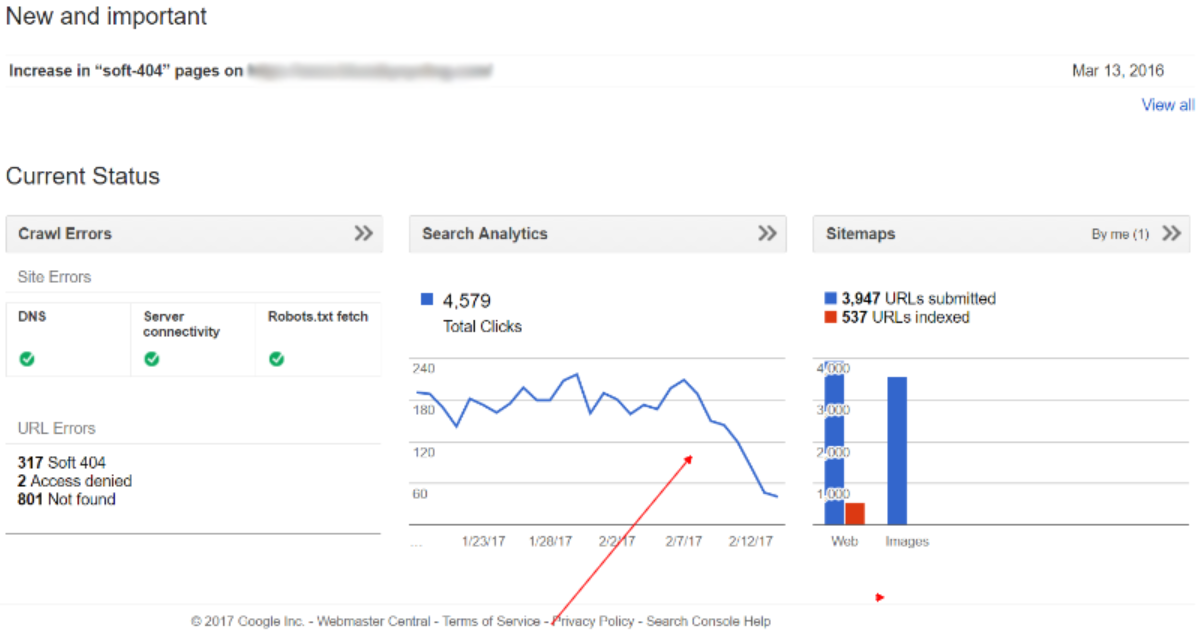 It was clear from this picture that the site was suffering traffic drop and other technical issues due to the poor migration process. Many important keywords and pages ranking position were sharply dropped both on mobile and web. And it was probably also hurting their link building effort.

Those 10 points being shared with the client team I scheduled a meeting with them, where we agreed upon a plan to do extensive server log file analysis, meticulous coding audit and use external tools like Ahrefs or Semrush to acquire more migration error data and prepare an organized task list to fix them accordingly.

I also published a Magento SEO audit article, you may find it useful. Please read my ecommerce marketing tips article as well. Lastly, you can hire me for ecommerce SEO and digital marketing projects and I would like to help.